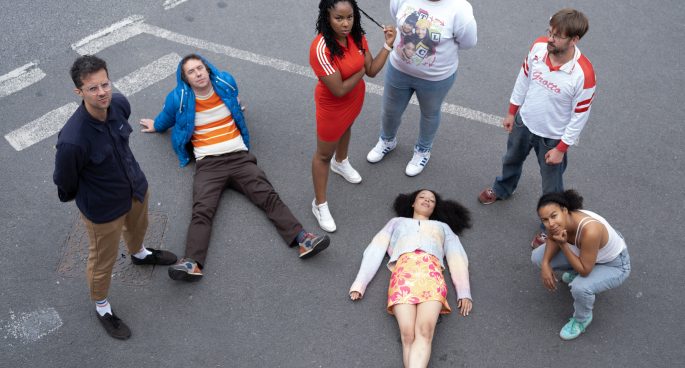 Strap yourselves in, because this week we have a bucket full of new tracks to dive right into.

First up we have this weeks feature album Tableau by The Orielles. An ambient, cinematic, and indie-pop  record, this stellar new album that holds creativity in all its abstract forms at its heart. The Orielles have really put their polymathic skills on display being the creators of their own musical works, to producers, to filmmakers and more. A lovely fusion of experimental loops, jazz musicality, and oblique 21st century electronica.

Fans of Adalita, the Magic Dirt frontwoman, have been handsomly rewarded for their nine year wait with the recent release of her greatly anticipated third studio album Inland. Inland has expertly arranged soaring instrumentation which melds with introspective lyrics on this shoegaze indie rock record that glides across soundscapes of reverb-drenched guitars and powerful evolving melodies, that drip with emotion.  Fans of Kate Bush, The Cranberries, and Joni Mitchell will love this album.

US based beat maker Eliot Lipp also released his second studio album Encounters last month. This album has a huge array of electronic sounds that span a vast array of genres from hip-hop to techno and lush samples gel with meaty beat production and tripped out effects-work. If you want subtle, groovy, and ambient background music this album is perfect for you to set the mood.

For fans of Felivand and Milan Ring and Little Dragon, Naarm-based artist Komang’s debut EP Mythologies has also recently been released.Filled to the brim with soulful lofidelity RnB  infused with inspiration from her Balinese heritage, such as sindhenan (Javanese court singing), gamelan and dangdut (Indonesian folk-pop), combined with crisp electronic beat-making make this a fantastic first EP from the Melbourne artist.

Lipsticism has just released their debut album Two mirrors facing each other. The album is the solo project US-based composer Alana Schachtel. Two mirrors facing each other is characterised by celestial synth-pop sounds with affected choral soundscapes, undulating melodies and a constant sense of space, pierced by wandering synthesiser lines and experiments in dreamy sonic deterioration. Written and recorded between 2018 and 2022, the album will be an instant hit for fans of Jockstrap, The Glass Picture and Modal Melodies

UK four-piece Modern Studies has also recently released their latest EP Cassandra which demands to be heard from the its very first song. With pumping basslines, beautiful harmonies, and haunting arrangments. The EP thematically explores elements of classical mythology and philosophy with its title being a reference to Cassandra, a figure from ancient Greek mythology. Cassandra is a beautiful collection of abstracted art-pop that you should definitly check out.

Cognition 303, a compilation of various artists celebrating the cherished legacy of the Roland  TB-303 synthesise, also released in late November. A collection of funky squelchy bleeps, and grimey basslines, this album is a wonderful display of the beautiy and unique sound of analogue synths like the TB-303 in the experimental electronic music movement.

A personal favourite of mine, The Go! Team has released a new single Whammy-O with vocals from NYC based rapper Nitty Scott. Whammy-O will have your head bobbing from the very second, with this new single managing to capture the distintive sound the is engrained in all of The Go! Team’s songs while taking it new and more experimental directions.

Blood has released a new single Self Improvement from Philadelphia recently. Self Improvement is a great grainy post-punk song with wonky basslines pulsing underneath a guitar-laden topline. Any fans of Joy Divison, Talking Heads, The Clash, or Television will love this track!

Sometimes Australia can get boring. That’s why I’m suggesting you listen to Gabriel da Rosa’s new single Bandida. A gentle brazilian styled pop tune on a 70s tip from the always interesting Stones Throw label out of Los Angeles. And make sure you don’t miss the second track, Jasmin Parte 1, which has beautiful guitar, and angelic harmonisations that will have you swaying in not time.