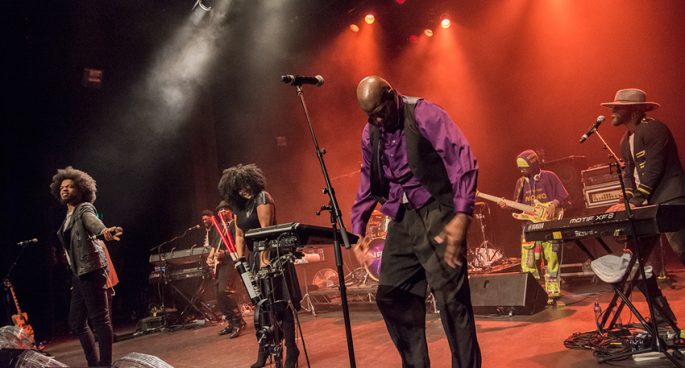 I could just spend my word-count raving about Támar Davis – one of the vocalists who fronted tonight’s incarnation of NPG, who were Prince’s backing band from the early nineties through to the emergence of the all-female 3rdeyegirl band in 2014. But that would be a disservice to some of the other remarkable musicians who took to the Enmore Theatre stage and are currently touring Australia for BluesFest. Still, Támar Davis deserves special acknowledgement, as she is something of a powerhouse: energised, vibrant and utterly in control of her considerable tonal range. With a voice like hers, she deserves to be more of a household name here, especially since one of her former bandmates in Girls Tyme (the precursor to Destiny’s Child) certainly qualifies as one. While Beyoncé could retire never having to lift a finger again if she wanted, Davis was subjecting herself to auditioning for a certain TV talent quest show in 2016. And that, has surely got to suck big time.

Never an official member of NPG, Davis nonetheless was a longtime associate of Prince and duetted with him on the 3121 album track, Beautiful, Loved and Blessed. That tune enjoyed a spirited workout tonight, with audience instructions that involved not only singing along, but hand-signing the chorus with animated gestures. Later, in emotional renditions of tracks like Purple Rain, Davis fully unleashed the true soul-grit and raw potency of her tonsils – and the audience lapped it up. Elsewhere in tonight’s “Celebrating Prince” dubbed show, it would have been almost comical if not so impressive, that with arm fully outstretched so that the microphone was a good meter away from her mouth, Davis’ voice could be heard loud and clear above the other eight people on stage. (Just for a bit of contrast: when guitarist/rapper Tony Mosley took to the mic for some rhyming, we could barely hear his voice, which begged the question:  Why isn’t someone at the mixing desk according him some gain?). In fact the volume of the entire band could have increased about 30% throughout. Presumably some sorry sod, somewhere in Enmore, has been making noise complaints again. Damn U! Under the musical direction of longtime keyboardist Morris Hayes, NPG led the crowd down a highly enjoyable, emotionally-charged memory lane of tunes featuring Kiss, Controversy, 1999, Sign O The Times and many more. Occasionally creating mini-medleys by quickly segueing between hits, it can’t be an easy job picking a “best of” from what is a vast musical canon. It’s also an unenviable job in terms of crowd expectations to have to run through some of Prince’s most loved tunes, without the purple one’s own genius presence. Prince would have been able to demand a few more hours of stage time for starters. While many people claim to miss him daily, in this scenario, no matter what your level of fandom, missing him is preordained. Luckily the love and commitment NPG invest in the job of sharing his songs with craft and finesse is palpable. It also means the performance never really resembles anything close to a “covers show”.  The musicianship exhibited was also impressive – particularly drummer Kirk Johnson, lead guitarist Homer O’Dell and bottom-end commander Mono Neon, the latter’s Gryffindor-style socked-bass and funky-arsed outfit deserve a special nod too.  The precision of the band’s every turnaround was airtight and slick throughout.

With vocalists Mackenzie, André Cymonen and Kip Blackshire doing a great job bringing Prince’s provocative lyrics to life, Támar Davis never had to carry the show, even if she did kind of steal it at moments. 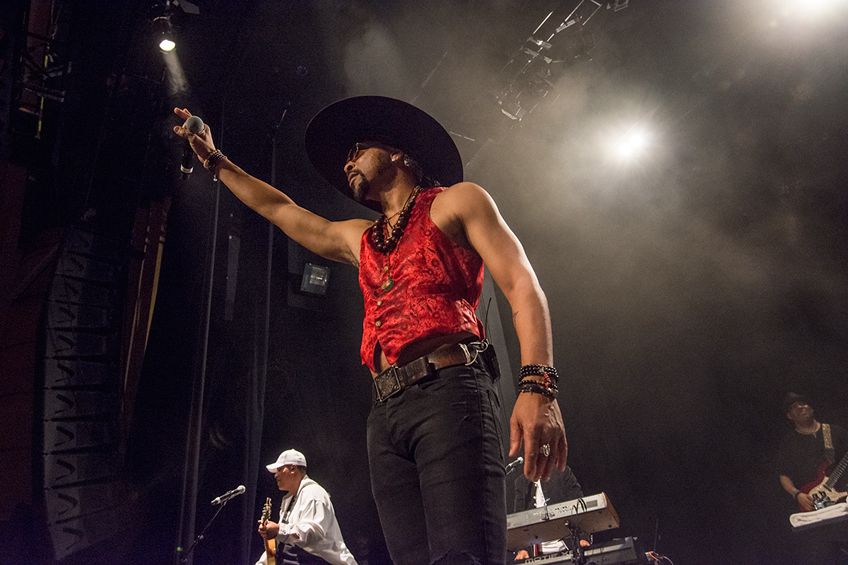