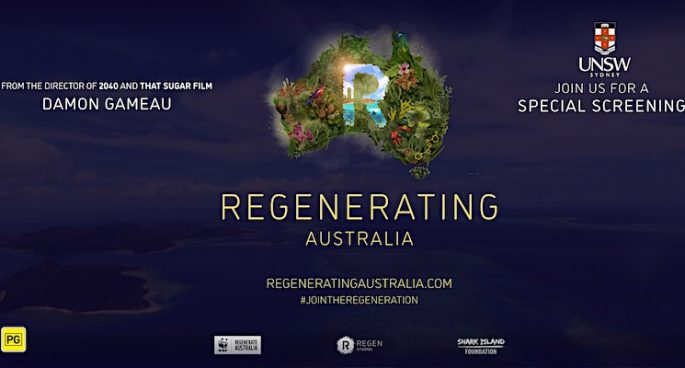 ‘Regenerating Australia’ is a 17-minute short film – and accompanying impact campaign ‘seeking to accelerate the transition to a regenerative future’ – helmed by the award-winning director of ‘2040’ (2019) and ‘That Sugar Film’ (2014) Damon Gameau. Trailer

Set on New Year’s Eve of December 2029, the short film is framed by a news bulletin which looks back on the decade that ‘could have been.’ ‘A decade that saw Australia transition to a fairer, cleaner, more community focused economy.’ Utilising news reports, press conferences, and recognisable Australian figures (i.e., Kerry O’Brien, Gorgi Coghlan, Sandra Sully, Tim Flannery, and Larissa Behrendt) – whether they be politicians, journalists, or business leaders – the film ultimately begs the question: ‘What would Australia look like in 2030 if we simply listened to the needs of the people?’

Produced in partnership with WWF-Australia, the film is based on a four-month ‘listening campaign’ with a diverse group of Australians who shared their hopes and dreams for the country’s future.

Felix Shannon of Tuesday Drive speaks to Ben Newell – Professor of Cognitive Psychology & Deputy Head of the School of Psychology at UNSW, and the host of the expert panel this Thursday – about the unlikely connection between psychology and climate action, contrasting media representations of the ‘climate crisis’, and Australia’s potential for change in the coming decade.

Those who are passionate about and inspired by the film are invited to participate in the ‘Innovate to Regenerate’ Challenge where they can propose ideas and potentially receive a $2 million ‘solutions fund’ from WWF-Australia to ‘help the best ideas get off the ground’ and ‘build a thriving Regeneration Network.’ Get involved

Nicola Saltman is Communications and Stakeholder Engagement Manager at Stride Renewables, a boutique advisory firm with expertise in renewable energy. She completed a Bachelor of Advanced Science (Honours) at UNSW and is now an engagement and communications professional with over 20 years’ experience in climate change, clean energy and sustainability in Australia and overseas. Nicola has led award-winning sustainability initiatives across government (local and state), not-for profit and commercial sectors. Notable examples include the National Green Power Program, WWF-UK’s climate change campaign, a pioneering community demand management program and Solar my School. She has also previously run a successful freelance communications business The Good Type. Most recently she’s been leading communications and engagement on the NSW Electricity Roadmap. Nicola brings valuable perspectives and expertise from this diverse career, alongside a passion for facilitating positive social and environmental change.

Rebecca Prince-Ruiz is the founder of Plastic Free July®. Rebecca is a change-maker, author, TEDx speaker and sustainability professional who is motivated to care for people and planet. Rebecca believes that as individuals, by changing our relationship with plastic and challenging our consumption together we can work towards a world without plastic waste.

Ben Newell is Professor of Cognitive Psychology and Deputy Head of the School of Psychology at UNSW Sydney. His research focuses on the cognitive processes underlying judgment, choice and decision-making and the application of this knowledge to environmental, medical, financial and forensic contexts. He has published over 150 articles and book chapters and is the lead author of the book Straight Choices: The Psychology of Decision Making. Ben has worked with industry and government partners on projects including climate change communication, child protection, aged-care provision and retirement wealth-planning. A key theme of much of this work is over-coming the myopic thinking that tends to cloud our judgment when we are making decisions about an uncertain future. Ben is a member of the Academic Advisory Panel of the Behavioural Economics Team of the Australian Government.