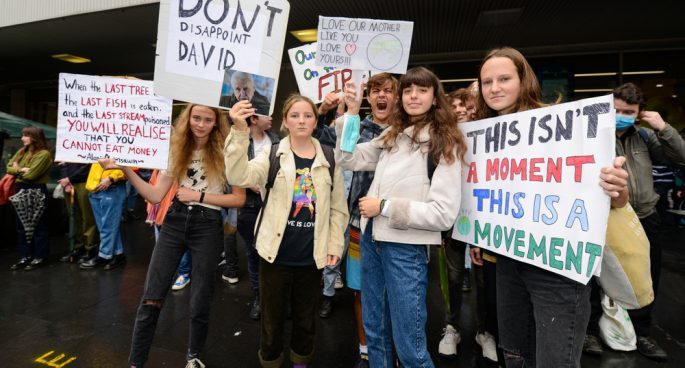 Last week on May 21st, thousands of students and campaigners walked out of classrooms and their offices to participate in the School Strike 4 Climate all over Australia.

Huge rallies were seen in the Australian capital cities on Friday. Particularly in Sydney, despite the pouring rains, strikers called for climate change action. Also abiding to the COVID-19 situation, COVID marshals were scattered among the crowd, handing over face masks and hand sanitiser for safety purposes. This protest also came as a response to the Morrison Government’s decision to fund a $600m gas plant in Hunter Valley.

This protest were not only taken on streets but on the internet too, with Twitter flaring up with hashtags like #ClimateStrike, #FundOurFutureNotGas, #ss4c and #ClimateAction. Mixed school support was to be found for the protests, with some schools very supportive while allowing the students to even post flyers about the event on school grounds whereas some schools discouraged their students from being part of the protest. Students marched to a total of 47 sites around Australia to campaign against the global heating situation.

While talking about the main objective for this protest, Natasha, one of the many voices of the School Strike 4 Climate Moment told interim 2SER Breakfast Host Marlene Even, “We are demanding our leaders to fund our future and not gas.” She also added, “We…need the government to use this money towards renewable energy which is much more sustainable and is more beneficial both, environmentally and economically.”

While speaking to a member of ABC, some students remarked that the reason for their involvement in this protest was to voice their concern since they were too young to vote. This protest was also covered by Greta Thunberg who is known famously as a Swedish environmental activist. She also retweets a series of post by the School Strike 4 Climate Australia official account.

Huge climate strikes today across Australia. Tens of thousands of people. Soon the rest of the world will join in… #schoolstrike4climate #ClimateStrike https://t.co/J066GWj7I8

A report by the International Energy Agency (IEA) found out that immediate action was needed to meet a target of net zero gas emissions by 2050, which includes no new investments in new oil, gas and coal mines. The news announcing the $600 million Hunter Valley power station put the government under more scruntinising eye. Prime Minister Scott Morrison recently issued a statement saying that Australia remained on track to meet its Paris Agreement target of a 26 to 28 percent reduction on the country’s emissions from 2005 levels by 2030. He was indeed distressed to make sure to set a more ambitious target at a recent global climate summit.

The next conference for the discussion of UN Climate Change is set in Glasgow in the month of November 2021.

To hear the full interview with Natasha, click here.