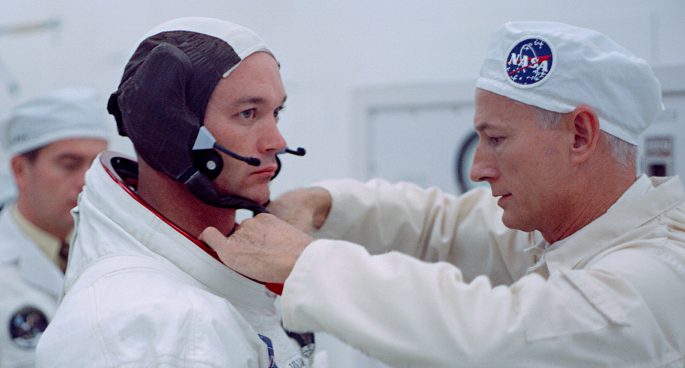 The Apollo 11 mission might be one of the last things that could typically call for a suspense-ridden retelling. Thankfully, the filmmakers didn’t listen.

Timed with the 50th Anniversary of that which put Parkes, NSW on the map – Director Todd Douglas Miller, NASA and a crew of archivists have sifted through about 11,000 hours of uncatalogued material to bring us footage; some familiar, some unseen and almost all thrilling recounting Neil Armstrong and co’s eternally famous endeavour.

Tracking the days leading up to the task, the flight itself and aftermath, the compilation of that novel near renders the mission as anticipatory as any other intrepid, risk-heavy spacecapade.

Combined with a fitting, tension-inducing score and then-contemporaneous commentary, the long-held shots on the lift-off in particular, centred on the igniting blasters and increasingly distant shell, are as abundantly memorable as any recent retelling of that done comparatively lesser justice by the likes of First Man. To this point, the chronicling of the landing sequence, staged much as it was by Damien Chazelle with a focus on the limited resources left to ensure safe passage to the surface, in the hands of the documentary filmmakers (fairly drawing on key, original footage inherent to the endeavour) is riveting, edge of your seat stuff.

Relying in some segments on more abstract images and graphs to represent the trajectory of the craft, these sequences, in part for lacking, unlike much of the film, distinctly human, naturalistic elements, are among the least effective. It’s kind was much more effectively imparted in, say, the better scenes in Interstellar, which yes was relying on a much more sizeable budget.

Becoming rather procedural as Neil and Buzz (who thankfully, together with Michael Collins, are credited as cinematographers) jaunt about the moon, Apollo 11 soon picks up it’s pace; delivering stellar (forgive me) material from what many wouldn’t take readily as a source of fresh inspiration.

Apollo 11 screens as part of the Sydney Film Festival on Monday 10 June at 9:30AM at the State Theatre, Saturday 15 June at 2PM at Casula Powerhouse and Sunday 16 June at 1:45PM at Hoyts Entertainment Quarter