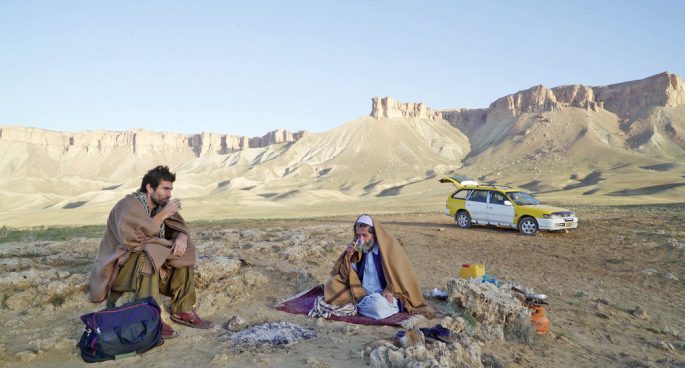 Defying stylistic convention as that which would typically be associated with parts of rural Afghanistan, Jirga is a tricky one.

Returning to Afghanistan and the site of a fateful raid following a three-year absence, a former Australian soldier (Sam Smith) seeks out an isolated village in one of Afghanistan’s more unruly provinces. Filmed on location, the evident constraints and indeed novelty of traversing the landscape to accomplish the production are abundantly reflected in the film’s style and choice of direction.

Filmed with a camera purchased at a Pakistani shopping mall and having to abandon the original plan after the script was deemed too politically sensitive and funding disappeared, New South Welshman Benjamin Gilmour shot the film himself off the quickly rewritten material. The limitations of the production conversely lend it a documentary-like, naturalistic sheen that (in spite of the restricted technical possibilities) together with the distinctive shooting locales ultimately benefit the film.

Travelling from Kabul to less populated areas, aspects of the plot development and one particularly heated encounter will appear more than unlikely to many familiar with Afghanistan and the particular breed of militancy which has such a stranglehold on so many provinces.

The likeliness of the former soldier and evident westerner managing to tackle this landscape (with precious cargo intact) aside, choices made and actions taken along the way, given above all else the Soldier’s evident sense of contrition which drives the story’s crucial details, will not gel so well with many.

The conclusion, the emotional crux of the film, is elaborated on only in the film’s third act, up to which time we are not treated to much else save the Soldier’s stoic determination to reach this point. The confrontations and drama which ensue is palpable and hugely involving and the only albeit fairly extended aspect of the feature which is duly so. The concluding and largely isolated sequences are so distinctly engaging and different in manner from that which preceded it that they could just as well have served their purpose and function if encapsulated within a shorter film.

With aspects of the precarious production proving as if not more compelling than segments of the film, Jirga is regardless a curious fascination for those engaged with the region.

Jirga screened as part of the Sydney Film Festival