Shabaka and The Ancestors at the City Recital Hall 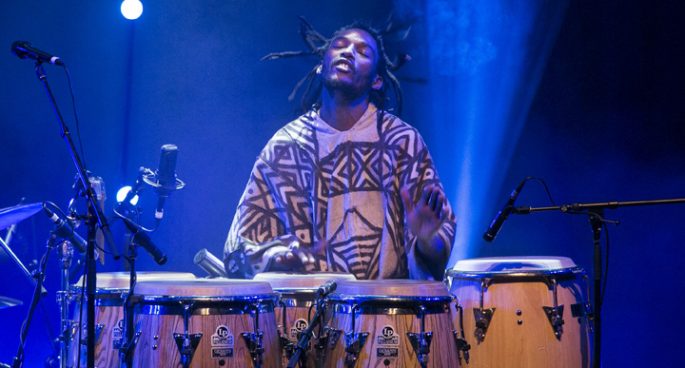 On Wednesday night in Sydney, London-born Caribbean saxophonist Shabaka Hutchings came pretty close to blowing this listener away. But not in the usual way a saxophonist who traces their musical ancestry to the experimental free-jazz and avant-garde movements might. This wasn’t a show of squawking, frenzied solos prone to needling those with a nervy disposition, even though Hutchings’ first solo of the night – delivered barely minutes after walking on stage – outranked solos I’ve heard saved for a concert’s zenith point when lesser players are sure the end is near and lung endurance won’t be an issue. Instead Hutchings’ playing, like his humble presence on-stage, was endlessly inventive and expressive, both in timbre and melodic turns. Throughout this spiritually charged show, even when reaching for the outer limits as the impressive band around him hit full-throttle and egged him towards more feverish frequencies, Hutchings’ horn sang rather than screeched, snaking with lyrical incantations.

The interplay between this improbably tall, barefooted bandleader and fellow saxophonist Mthunzi Mvubu to his right, was so pitch perfect, so harmonically inspired and so utterly gorgeous at times, that despite the gaping disparity in their heights, there were moments when the two seemed to fuse into one. As both coaxed remarkably human sounding voices from their saxophones, Siyabonga Mthembu’s unconventional, and sometimes scat-like vocals, found their perfect prayer partner, illuminated by a beautifully simple light show.

Just like their only album to date – 2016’s Wisdom Of Elders (released on Gilles Peterson’s Brownswood label and recorded across just one day in Johannesburg) – tonight’s performance was presented as a seamless suite with no intervals between songs for spell-breaking chatter. 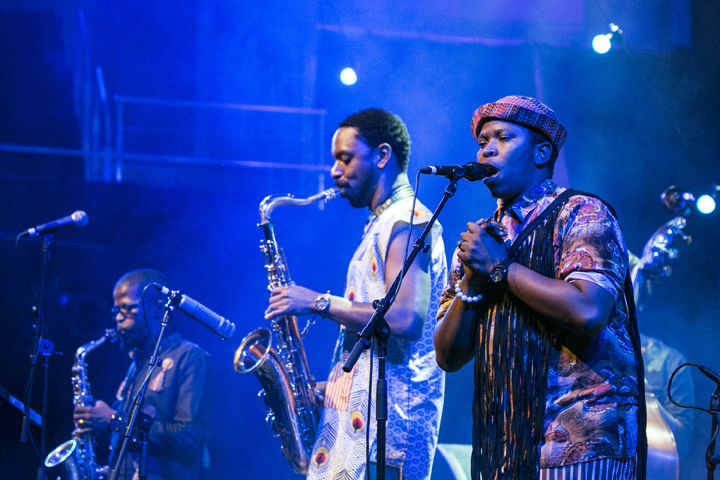 Whilst every member of tonight’s sextet impressed in their own right – from percussionist Gontse Makhene’s fluid and earthy technique (a human wave of limbs and dancing dreads floating above five congas) to Tumi Mogorosi’s tom-heavy perpetually rolling style – special mention has to go to double bassist Ariel Zamonsky, who called to mind Shriekback’s adage “my spine is the bassline”. Like any body [politic] without a spine, it would be largely rendered paralysed and the righteously conscious Ancestors are no exception. Every one of Zamonsky’s notes was crisply discernible, high in the audio mix. Each of his febrile slides along the frettboard, rapid-riffs and thrums, a small thrill. Then came his solo, where at one point the bassist yanked out a bow and began beating the strings intensely. It didn’t feel showy, it just ensured that tonight’s performance was now definitely being filed in the part of the brain earmarked for the indelible. 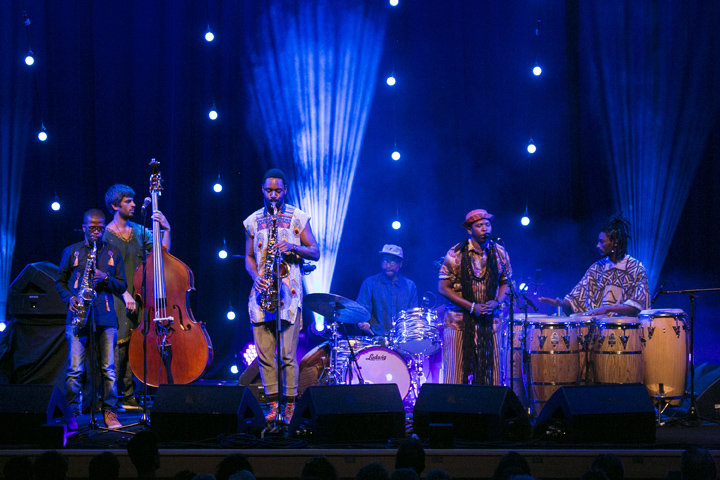 Yet, one person was even more memorable tonight: singer/poet Siyabonga Mthembu. Again, not because he blew us away with virtuosic vocal gynmastics, The Ancestors are very much a sum of their parts. Less is more with Mthembu. Like the softly spoken Hutchings (who finally spoke before their closing tune), there was no commanding of the spotlight, but each of his chants, each word, each response to a horn line, was ideally placed. Riffing on a recurring, but escalating theme built around the line “the burning of the republic in our minds and in our hearts” Mthembu gave the otherworldly music context. He reigned in its spiralling heaven-bound fantasies, bought the collective consciousness back to earth. That he managed to also deliver an earth-saving manifesto that was equal parts feminist, environmentalist and socialist, whilst also acknowledging the recent passing of Hugh Masekela without every sounding preachy, was impressive. 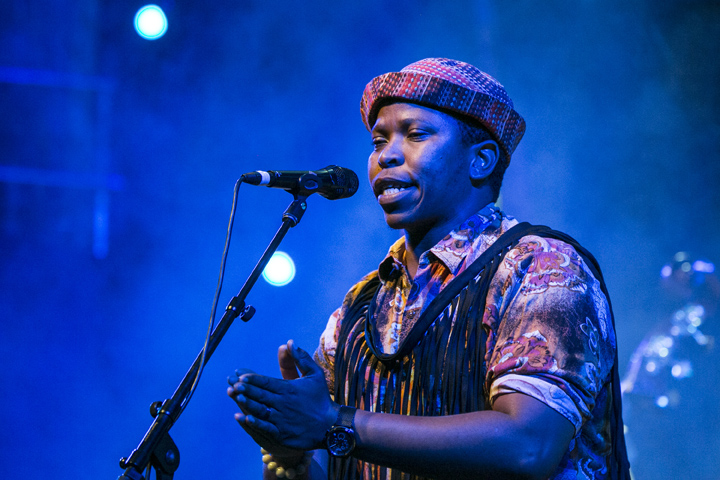 “Yes, it’s me again,” he quipped, possibly spotting the odd thought-bubble above the audience rising from those whose idea of a jazz performance, however futuristic, doesn’t extend to abstractions beyond the arrangement of notes.

“Private property is a farce,” he rapped.

Tonight’s performance was anything but. 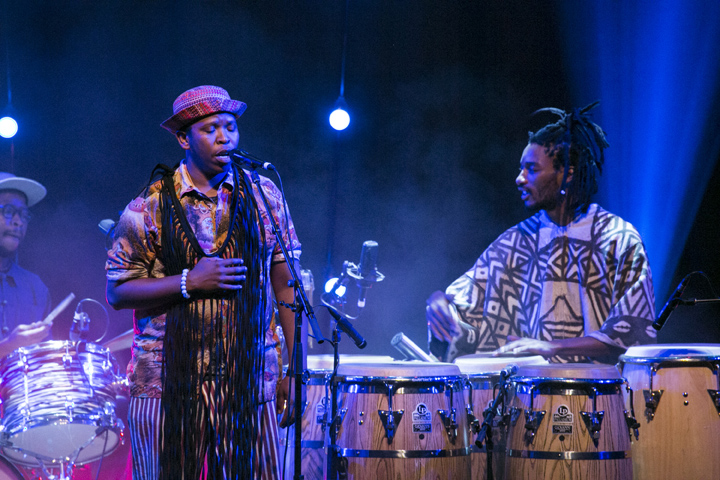 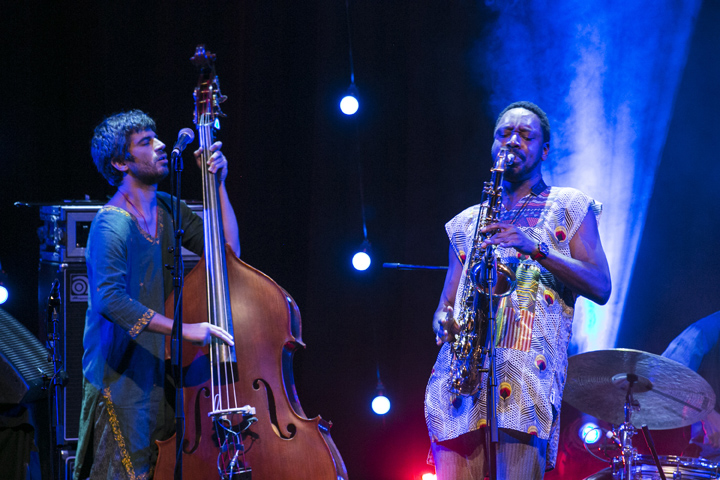