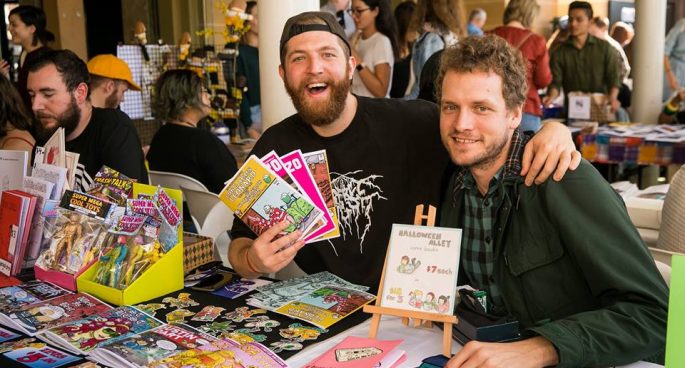 Performed by cast members from the Older Women’s Network NSW Theatre Group, this cabaret show, part of Batch Festival, highlights some real issues affecting our older generations. Expect lots and lots of laughter – and some tears.

Much loved inaugural event the MCA Zine Fair once again showcases 100 creators of zines, small press and comics, as well as free talks and workshops.

As part of CLIMARTE’s Art and Climate = CHANGE 2019,  get down to the Australian Museum for a talk from the Director of NYC’s Climate Museum Miranda Massie. Miranda will discuss the background to the Climate Museum as well as the public art installations and future projects, taking over New York City.

Part of Head On Photo Festival, Tuesday night is the opening of Happy After Ever, photographer Lisa Tomasetti’s new exhibition which intends to produce a series of photographs affirming the lasting power of the photographic image. This series asks whether the ubiquity of photography has threatened its authority as art, and at worst whether its practice remains a valid form of visual expression.

Catch the opening of ‘Never Let Me Go’, as part of Batch Festival’s takeover of the Griffin Theatre in Darlinghurst. The play details the poignant AIDS epidemic in 1980s Sydney and features a decade appropriate soundtrack, sung by an acappella choir. Written and produced by Adriano Cappelleto.

What would an artist run world look like? Would housing, schooling, taxes, and other policies governed by artists and culture makers look different? Join a feisty conversation hosted by Bek Conroy at 107 Projects this Thursday night.

Synth lord Luke Million will takeover the Lansdowne on Friday with support by Reija Lee and Juna Disco. Luke Million’s Excellent Adventure tour will whip crowds into a funky frenzy. His Stranger Things theme remix is not to be missed and fans will also be treated to some new music.