So Hot This Week: September 29 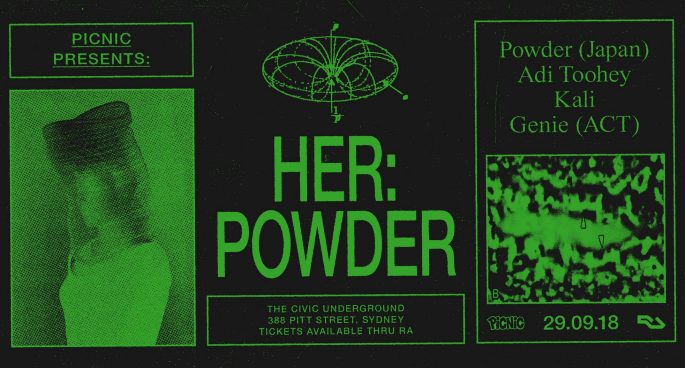 After absolutely slaying it back in 2016 in a smokey warehouse somewhere along the Princes Highway, Japanese super-producer Powder returns to Sydney. She’s released an EP on Cocktail d’Amore – which is still rotating regularly on turntables all over the world. The great female line-up is presented by picnic is supported by Kali, Adi Toohey, Genie (ACT). Civic Underground, 10pm-4am, $15-$25.

The Sydney streetwear brand that has a reputation for enjoying a bender more than any other cotton-slingers in the country is taking over the entire Lansdowne Hotel for the upcoming Labour day long weekend. Featuring RACKETT, Crocodylus, BOYTOY, Lex Deluxe and more! The Landsdowne, Chippendale, 12am-11pm, $20-25

LoopdeLoop is a bi-monthly mini animation festival. Short, looping animations from all over the world will be screened, applauded and judged by the audience at Knox St Bar! If you’d like to submit your own animated loop, check out www.loopdeloop.org ,Knox St Bar, Chippendale, 7-9pm  Free

JFF Classics at Art Gallery of NSW – Passion and Obsession

#JFFClassics2018 returns to the Art Gallery of NSW, it is FREE and better than ever. Passion and Obsession is depicted in varying shades of #eroticism ranging from melodramatic romance to fraught love affairs.

OXJAM IS BACK at the Red Rattler.  Join them for an unforgettable night of live music at  feat. MICKEY KOJAK, THE KNOW, LEX DELUXE & DJ MIGRAINE. All proceeds in aid of OXFAM to help beat poverty 👊 The Red Rattler Theatre, Marrickville, 8pm-1am, $16.91 – $27.46

Grey Matter: In support of the Cure Brain Cancer Foundation

Since his operation and recovery, Moonbase has teamed up with the Cure Brain Cancer Foundation to help raise awareness about the disease, which affects so many young Australian’s today. All proceeds from ticket sales will be donated directly to the Cure Brain Cancer Foundation in pursuit of brain cancer awareness and research. Oxford Art Factory, Darlinghurst, 9pm-3am, donation at venue