NYC’s SUM Back In Oz New York City six-piece SUM return to Australia with their slick hybrid sound. The band is as much a sum of its musical parts (soul, jazz, r’n’b, hip hop) as it is a meeting of two minds and kindred spirits:  Vocalist/writer Patryce Williams and drummer/musical director Steve Belvilus. 2SER’s Paris Pompor caught up with the pair ahead of their Sydney show in April.

Listening to SUM’s self-titled debut album released at the end of last year, it’s the clever and sometimes unexpected arrangements that first make an impression. While there’s a pop leaning to some of the vocals – and certainly to the video for first single It’s Alright To Be Me –  verse/chorus/verse  cycles are not the norm for SUM. The band prefers to keep listeners dancing on their toes, as composer and lead-arranger Steve Belvilus (ex-Les Nubians) leads the others through jazzy turnarounds and instrumental interludes. Case in point: album highlight and centrepiece Test The Waters – which comes on with neo-soul determination before forking into swinging basement passages with ample space for Andrew Gould’s saxophone to snake and stretch alongside Gil Defay’s trumpet. This is probably enough to disqualify the track from any pop-oriented radio play, yet it’s the gorgeous and surprising minute-plus outro that is the final payoff. In it, scatting and duetted vocal harmonies end almost in a cappella mode, save for the accompaniment of a Hammond organ in rotary mode.

“It’s actually the oldest tune on the record,” advises Belvilus.  “I wrote it back in 2008 with a songwriter friend of mine, Atiyya, when I went through a very tough break up. That inspired me to write the music.  The music came first, then the melody and the rest. It is now totally different from what it was before.  I rewrote the whole song and wanted to simplify [it] a bit –  the harmony and structure –  for the record.  I did a new arrangement of it that we play live, that I have not recorded yet.  The organ part at the end was imagined by me because I wanted to mention my gospel influences… I have to say, this is a song that I am not quite happy yet with.”

So, although it’s a standout for this listener, apparently Test The Waters has just been living up to its title so far, and is yet to be perfected. That probably tells you a lot about how much is invested in SUM’s music. When I mention that the whole album (especially Test The Waters with it’s “follow your dreams” refrain) comes across as very positive, Patryce Williams seems glad I picked up on that.

“I’d say that I’d 100% agree with you,” the singer enthuses. “Keeping a positive outlook is the mantra of this band.”

It can’t be easy staying positive when making a living from a creative pursuit relies so much on other people’s opinion of you and your work. After all, if the audience isn’t digging your latest single, album or gig, how do you maintain optimism?

“What keeps us grounded,” continues Williams, “is not to fall into the trap of relying on others opinions on what we do. Of course you want people to like what it is that you’re putting out there, but you have to maintain your peace and trying to live up to someone else’s expectations is not healthy.  So we create the music and hope for the best.”

To date, that philosophy is paying off with equally positive reactions to the album, including Bandcamp declaring SUM the Best Soul Music Album available on their site during the month of its release.

So how did these two meet? And given they both write for the band, how do they collaborate?

“The short story on how we met,” explains Williams is “we pretty much have many mutual friends and at one of many parties, we started talking and then ran into each other again at another party and talked some more.  We don’t actually write together. Steve will give me a melody or a line that he hears and then I’ll write out lyrics and bring it back to him. When he writes lyrics he’ll let me hear what he has and we will chat about it a bit, if he has a question about a word or phrase.” “Every gig is a learning opportunity for me,” says Belvilus when asked if there’s been a favourite show to date that has been memorable for a particular reason. “I do love traveling, so my favourite so far was our gig in Paris: people were really receptive to the music, it was a gorgeous day and no one was on their cellphones. We were actually talking to people and it was a great human experience.  I hope to have that in Australia.”

Bringing the full six-piece band to our shores this April will be the second time the pair have visited Australia and the place has already made an impression.

“We visited for the first time last April and have fallen in love with the country,” admits Williams. “We were really taken with the beauty and diversity, which we didn’t expect.  We also loved the sense of balance and quality of life.  In New York it is very easy to get caught up in the fast pace and the hustle.  Bringing our music [back] to Australia was a natural fit for us because of the amazing time we had… last year.”

Given all the influences swirling through their music, what artists/albums made the biggest influences on them both growing up?

“Stevie Wonder is a big influence for me,” says Williams. “I think Songs in the Key of Life is one of the best records in history. The neo-soul artists such as Jill Scott, Erykah Badu and D’Angelo are certainly instrumental in my influence [and] The Miseducation of Lauryn Hill was certainly huge for me.”

For Belvilus, Jill Scott and D’Angelo also get a mention alongside Kirk Franklin, Roy Hargrove and Keith Jarrett.

Now, what about that band name, which by the way is pronounced ‘soom”? Surely there’s a story to it.

“What was most important for me,” explains Belvilus, “is to define my band by who I am and not necessarily by a style of music because I love a lot of different kinds of music and I can tell you right now that the next album will be very different. So I decided to name my band by a simple statement: ‘I am’ which is SUM in Latin. No one can argue with someone who introduces himself genuinely!”

You can check out SUM’s album here and catch them live in Sydney on Thursday April 18 at The Newsagency in Camperdown from 7pm with Jacob Diamond in support. Melbourne readers can also catch one of two shows at The Paris Cat Jazz Club, Friday and Saturday 19 and 2o. And remember: shows are better when your mobile stays in your pocket. 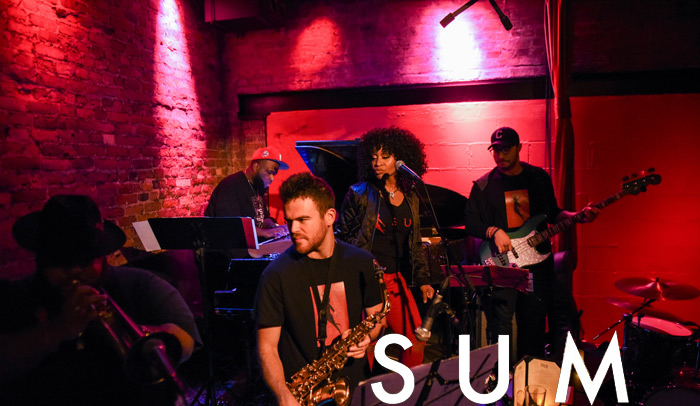