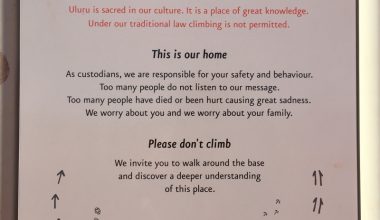 Have you been to Uluru? Have you climbed it? This week, the Northern Territory’s Chief Minister, Adam Giles, caused a stir by suggesting that the traditional owners of Uluru, the Anangu people, should rethink their opposition to climbing the famous rock.

Comparing it to the Eiffel Tower, the chief minister suggests that he ‘sees the benefits in allowing people to climb’, but what about the traditional owners of the land and the fact that Uluru is seen as a sacred site? Today we talk to a former tour guide to the area, Chris Watson. (You can read his blog here)