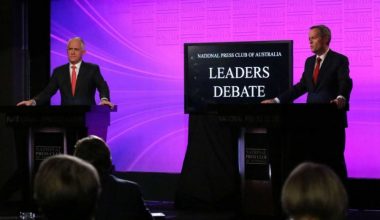 What were the key arguments in the Leaders’ debate held last night at the National Press Club in Canberra?

The party leaders had their first formal debate of the election campaign, with the primary focus on economic trust and sercure leadership.  Malcolm Turnbull and Bill Shorten spoke about ‘typical Labour versus Liberal’ policies according to Peter Hartcher.

We were joined by Peter Hartcher, political editor for the Sydney Morning Herald to find out more.