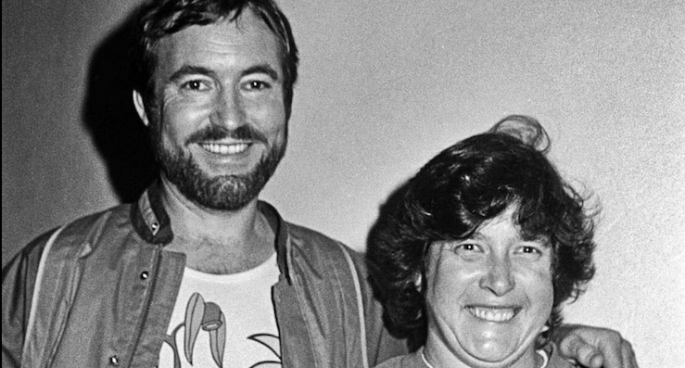 It is with great sadness that we report of the passing of Irene Morison, one of 2SER’s pioneer broadcasters. Irene wasn’t the first person to play country music on 2SER, but she certainly appreciated it when she heard it, and, with her daughter Barbara, went on to ensure the local variety of the genre was well represented at the station.

“Mum and Dad had a radio in their bedroom and Dad flipped the button by accident and found 2SER,” recalls Barbara Morison. Listening from the kitchen, Irene noted that “this is stuff I grew up with; where is this coming from?” It was Daybreak Serenade – initially broadcast from 5am to 7am 6days a week except for Saturday, until 2SER secured a 24-hour broadcast license; then it ran from 3am to 7am Monday to Friday and 5-9am Sunday mornings.

After some months of dedicated listening to the country music on air, the station had a “big show out at Fairfield” and the Morisons “went along” to meet the “blokes in charge” of the overnight broadcasts, Maurie Tayor and Garry Coxhead. Because the Morisons lived in Annandale, close to the station, the blokes extended an invitation to Irene to visit during overnight broadcasts. While Barbara’s Dad, having no desire to rise before the sun to take his wife into the station, said “no,” Irene was not taking ‘no’ for an answer. “Like any independent, strong-willed country girl,” Barbara says, her mother was intent on making her own way in to 2SER, and Barbara, unwilling to let her mother walk to the station on her own, accompanied her.

In hardly any time at all, Irene and her daughter became a fixture of the station’s country programming with All Kinds of Country (a program still on air, on Saturday mornings, still hosted by Barbara). They specialised in all-Australian music: Australian songwriters, Australian performers. Barbara took the reigns as presenter but, she recalls, “I was going to school – so who was my researcher?” Irene Morison, of course, who would “go and collect the resources” from the various second-hand record stores that proliferated throughout Sydney. Irene helped set the standard as a dedicated broadcaster and cratedigger, well before the hipsters caught up. 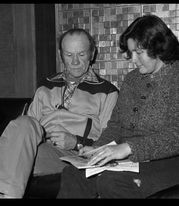 Irene interviewing Gordon Parsons (responsible for ‘Pub with no Beer ) 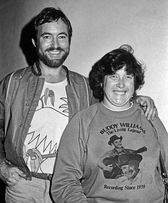 In addition she was one of the most loyal supporters of Australia’s first country singers; Buddy Williams, and for this reason, she will be thought of her often. Irene was in charge of organising and fundraising the placing of the bronze bust of Buddy, which can currently be found in Tamworth’s Bicentennial Park.

It’s hard to imagine what the local scene would be without Irene and Barbara’s work. 2SER was one of the first stations to play country music; though not the first community station, it was the first that covered “all of Sydney” with listeners as far north as Hornsby; as far south as Wollongong; as far west as the Blue Mountains and Lithgow. Attentive listeners – performers and punters alike – would call in from all over to report that they were hearing the signal “loud and clear”. Hugely respected by fans and artists alike, 2SER, listeners and country music itself were so lucky to have Irene; she is sorely missed.

Family and friends will gather this Monday 14th November for a Memorial Service at 11.30am at The Bald Rock Hotel, Balmain 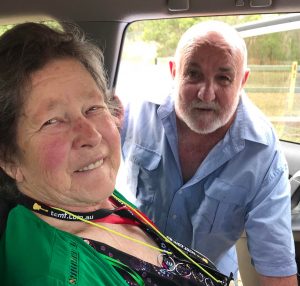