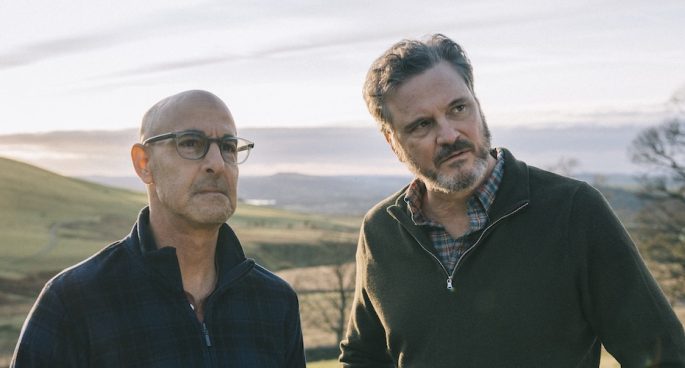 Now imagine are sitting at home, at work, or in your car listening to the radio. Then, out of nowhere, a sudden flash of inspiration, creativity, and entertainment flowed through the airwaves and into your head. Well strap in because that’s happening right here. Waynes 4 x 2 entertainment reviews, with Wayne Massingham – 4 reviews, 2 minutes each. Here’s the verdict.

Supernova stars Collin Firth and Stanley Tucci as partners Sam and Tusker. This touching roundtrip movie is a heartwarming and beautiful film about love, long term relationships, and making the most of our lives. You can catch it in most independent cinemas right now.

Murder Among the Mormons is a 3 part documentary series that combines religion, fraud and murder as it covers the events surrounding Mark Hoffman’s forgeries in the Latter-Day Saint movement. Each episode goes into the interesting history of the Mormon Church and the case. Featuring murder, fraud, and fascinating characters, Murder Among the Mormons is a fascinating peek into a world that some of us may not know about. You can stream it right now on Netflix.

Sweep It Into Space (Album)

Fifth album by Dinosaur Jr., ‘Sweep it Into Space’ is very melodic and possibly one of their best releases so far. It all comes together with new sound and catchy tunes without departing from the original Dinosaur Jr. Sound with its great drums, awesome guitar and genuine indie rock sound. You can catch it on Spotify or to purchase on Dinosaur Jr.’s Bandcamp.

The Last Word is a German production that follows Berlin couple Carla and Stefan on the night of their 25th anniversary party.  Then after all the guests leave, Stefan suddenly dies of a heart attack. The show then goes through Carla’s reaction to the death, and her touching yet dark journey through this period in her life. The macabre humor may not be for everyone, but it is well handled and in some ways accentuates this great show.