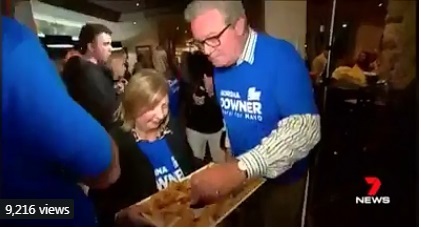 The weekend started with a spectacular lunar eclipse on Saturday morning. It’s been called a blood moon, which is seen as an omen for bad things.

Malcolm Turnbull would definitely have viewed it as a bad omen after the Super Saturday elections that saw Labor hold all 4 seats despite media claims that they were in trouble. The tables have turned, and now Turnbull’s leadership is seen as shaky with his unpopular tax package likely to be scrapped. Christopher Pine and Turnbull have tried to downplay the result, accusing Bill Shorten and Labor of over-celebrating.

It was a downer of a weekend for the Downer’s, as Alexander Downer’s daughter, Georgina, was unable to bring home the Mayo. She spent much of the election dodging questions around the legitimacy of man-made climate change. She has said that she will run again in the Federal election, so she has 6 months to work on her response. Alexander Downer was proudly supporting his daughter and humbly announced that the Downer’s were nation builders.

The real scandal of the weekend came on Super Saturday from footage captured by channel 7 that saw Alexander Downer double dipping his chips into the sauce at the Liberal Party shindig.