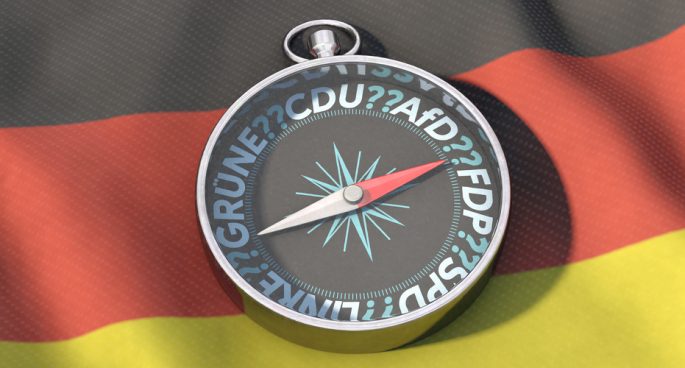 The Social Democrats [SPD] 25.7% have picked up votes from the Christian Democrats (CDU/CSU – [Bavaria] ) 24.1%  in the German elections to put them ahead but with both of the major parties this means that neither have enough seats in the Bundestag unless they combine with at least two and possibly three other parties.

The difficulty lies in the fragmentation of the vote.   The SPD could possibly combine with the Greens and the other left party – Die Linke  – except that Die Linke policy demands Germany withdraw from NATO, which the SPD cannot countenance.  And in this election another partner would still be needed to reach the required 50% of the Bundestag seats.

The current arrangement which is a coalition of SPD and CDU is unpopular with both parties, as they have both lost supporters as a result; so this probably cannot continue.

The Liberal FDP [11.5%] agreed to a coalition with the CDU in the last election, only to pull out at the last minute necessitating the awkward SPD/CDU arrangement.  The far-right AfD [10.3%] are too extreme to consider as a coalition partner for anyone, so tough negotiations will begin between Greens, FDP, CDU and SPD to try and find a working government.

Angela Merkel could still be Chancellor for quite some time in caretaker mode.