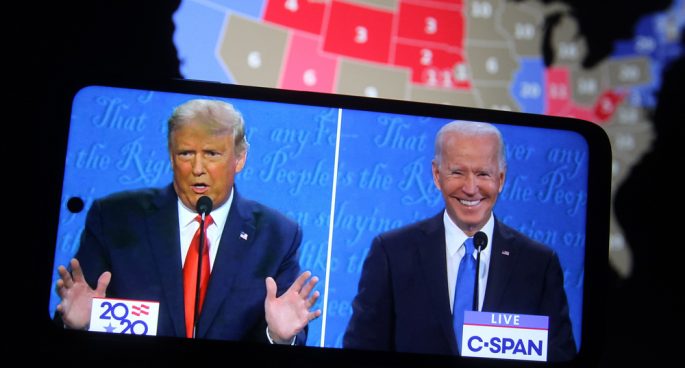 The 2020 presidential election between Trump and Biden, has been labelled as ‘one of the more remarkable elections in recent history’ by Kim Hoggard, a former U.S. government official who worked for two U.S. Presidents during the Republican stronghold of the 1980s. America has always desired ‘a president for all Americans’ with the promise of ‘freedom and liberty, justice, fairness and opportunity’. Recently, America has seen a significant and drastic divide, to the extent that it has been ‘bleeding purple’.

What has caused a divided America and what could that mean for American citizens?

The divide in America has only grown in the recent years. Many Americans seems to be tired of politicians who they feel that are not addressing their needs and rights. This divide appears to have grown out of the negligence of domestic issues of US citizens and so change has been demanded, once again. Many believe that some issues are being ignored such as abortion, religious freedoms, school choice, crime, law and order, low wages and the increase in unemployed individuals, while attention has been focused on the power in economy, small government, low deficits, strong military, international approach in keeping America in power, engaging in free and fair trade; as well as, engaging with international countries.

The citizens of America are demanding change, they are demanding for their issues to be addressed and their needs and rights to be meet; otherwise, it seems that the divide in America may only grow.

How has the media or the lack of media reach, influenced a divided America?

Communication is ‘key’ to reach citizens and resonate with them. However, America’s public broadcast is a shadow of the ABC and media has played a critical role on the influence of America’s politics and the divide in America; especially since some citizens lack access and reach.

Due to the lack of media reach, not all Americans have been kept informed about the political factors of society. It has seemed to appear that a certain type of brainwashing seems to have been done to the people, according to Kim Hoggard. People do not understand their own electoral system which makes change difficult. Moreover, small states don’t obtain the same value and weight that larger states do, which increases the gap in ‘voters say’ during election. The fact that there are presidents in history that have won regardless of losing the popular vote, seems to depict the notion that the ‘will’ of the country is not being reflected during election.

Women, as well as the youth of America, seem to have favoured Biden over Trump and they are the majority of the US. It seems that the recognition of issues such as pay equality, reproductive rights, economic issues and wages for women have influenced the favour of citizens towards Biden.

How would a Biden presidency affect Australia?

Australia has a strong relationship and reliance with America and Australia seems that it may welcome a Biden presidency, as Biden has made promised to rebuild allies that have been disrupted under the current presidency; as well as, improve free and fair trade. Biden has also said that he will re-join the Paris Climate Agreement. However, all this is yet to be determined and only time will tell.

Listen to the full discussion at Bleeding Purple: A Divided America.