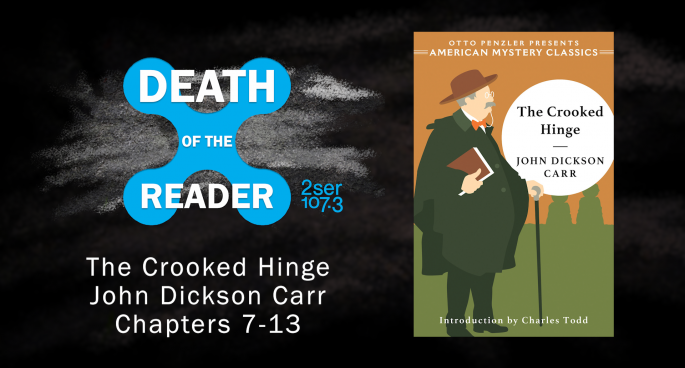 We discuss chapters 7-13, ‘The Life of an Automaton’, in John Dickson Carr’s ‘The Crooked Hinge’ with Brad Friedman of ‘Ah Sweet Mystery‘. Dr. Gideon Fell has arrived on the scene, but the we’re confounded by his being there to solve an entirely different murder; Victoria Daly. Weapons are found, an apple goes rolling, and the mysterious mechanoid stored on the Farnleigh estate comes rolling down the stairs as the spook factor of the novel starts to rise. Will it be Herds’ solution that makes it across the line, or is Flex’s bizarre suggestion the truth?
We’re also joined by Benjamin Stevenson to talk about his latest novel ‘Everyone In My Family Has Killed Someone‘. It’s as though he did his best to write a novel specifically for us, as his protagonist Ern goes about making a mess of the Knox Decalogue. Thanks to Penguin Australia for providing a copy of the novel.
Check out Part One and Part Three here!