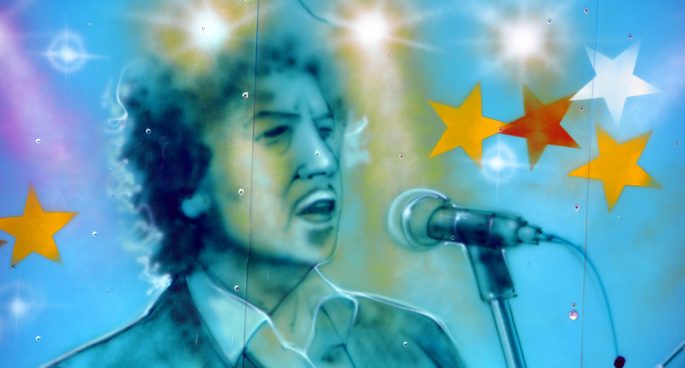 A Sydney institution since it first went to air in 1985, the annual 2SER Bob Dylan Birthday Marathon returns in May. Featuring all the classics and new releases, as well as news and views of the world of the Nobel Prize winning song writer and performer.

Last year Bob released the 6 CD box set of Bootleg Series Vol 14 More Blood, More Tracks the long anticipated aural excavation of the the 1974 classic Blood On The Tracks featuring every track put down at the legendary September 1974 recording sessions in New York. Many critics regard these recordings as more stark, honest and nuanced than the actual released version. This is our feature album. We also celebrate the 50th anniversary of Nashville Skyline and the 30th of Oh Mercy and preview the upcoming 14 CD box set of Rolling Thunder Revue: The 1975 Live Recordings due for release 7th June.

We have a detailed first hand account from dedicated Bobfan Mark Sutton of how he got to the front rail of Bob’s concert at the Enmore Theatre last August. We will play a track each from the Dylan Dynasty: Bob’s son Jakob Dylan and grandson Pablo Dylan as well as Cat Power’s Chan Marshall singing her love song to Bob. There are selections from Bob Dylan Live 1962-1966 Rare Performances From The Copyright Collections.

For the last 34 years 2SER’s Bob Dylan Birthday Marathon has been celebrating the Nobel and Pulitzer-prize winning artist’s birthday with news, reviews, interviews, the Dylan Quiz – and all the Bobsongs that fit. We will be hearing snippets from Bob‘s Nobel Prize for Literature, hearing Bob do a piece of It’s A Man’s Man’s Man’s World, Bob’s first recorded song, and flesh & blood Bobfans telling us about their favourite Bobsongs and of course the requests section roars into the early hours.

As ever there will be a profusion of live versions, soundtrack contributions, rare tracks. So for 8 hours and over 6 decades of Bobcat Heaven tune into 2SER and throw a party to celebrate the birthday of His Bobness. Saturday 25th May 8pm to 4am.

DATE POSTED
Friday 24th of May, 2019
PRODUCED BY
CATEGORY
TAGS
SHARE
SUPPORT US